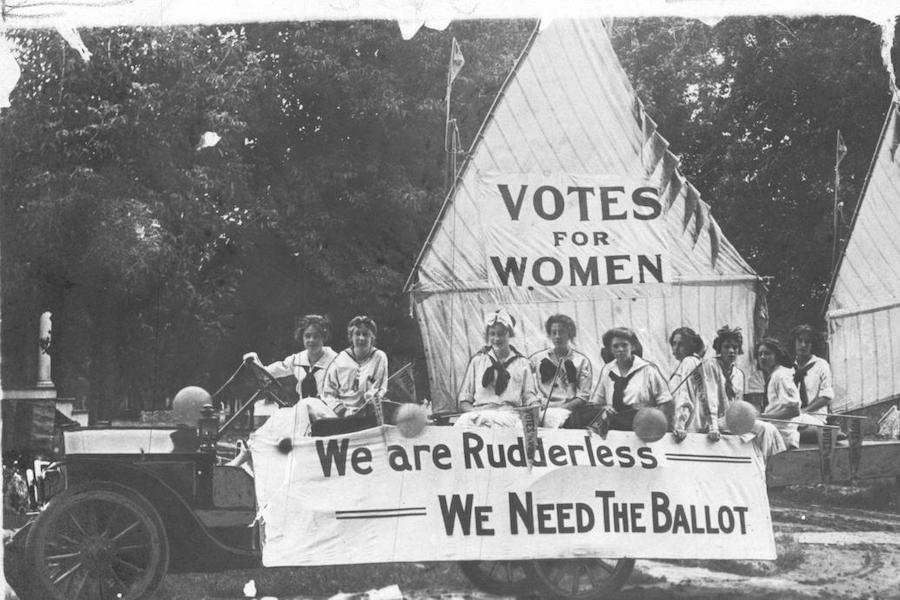 The Oshkosh Equal Suffrage League in a 4th of July parade in 1912.

There’s growing evidence that empowering women can have significant impacts on economic growth.

Policies aimed at reducing inequality between men and women have been called a “prerequisite” to eliminating poverty, reducing infant mortality, and achieving universal education.

A paper in the American Economic Journal: Economic Policy takes a look at how women’s enfranchisement in the United States affected investment in education for children. Authors Esra Kose, Elira Kuka, and Na’ama Shenhav found that suffrage led to large increases in educational attainment for children from disadvantaged backgrounds, especially Blacks and Southern Whites.

Figure 3 from their paper shows how women’s suffrage affected various groups in regions around the United States. The hollow circles represent female children and the triangles represent male. Each has a specification for race (Bl=Black, Wh=White) and region (S=South, NE=Northeast, MW=Midwest, W=West). The authors looked at children who were at most 15 years old when suffrage passed in their state, and examined how average years of education changed compared to cohorts of children who were older than 15 when suffrage passed in their state (and hence, less likely to be exposed to the laws while still in school). Groups that averaged four to eight years of education prior to women’s enfranchisement gained roughly one year of additional schooling post-suffrage, while more educated groups that averaged nine or more years of education before the law passed experienced little or no gain, as indicated by the downward sloping line.

The impacts were especially large for Blacks and low-educated Whites. For Blacks, there was an overall larger effect on males than on females (1.26 years compared with 0.55 years). Black males in the Northeast and Midwest, as well as Black women in the Northeast, had the largest gains (although these differences across regions were not always statistically different). Meanwhile, White children in the South who had comparatively lower levels of education gained an additional 0.96 years in education after suffrage.

The most likely mechanism for the educational gains was increased spending on schools, according to the authors. They found a close link between increases in education spending, enrollment, and completion. The findings highlight how women gaining political power can influence economic outcomes, particularly human capital investment.