The impact of television stardom on elections. 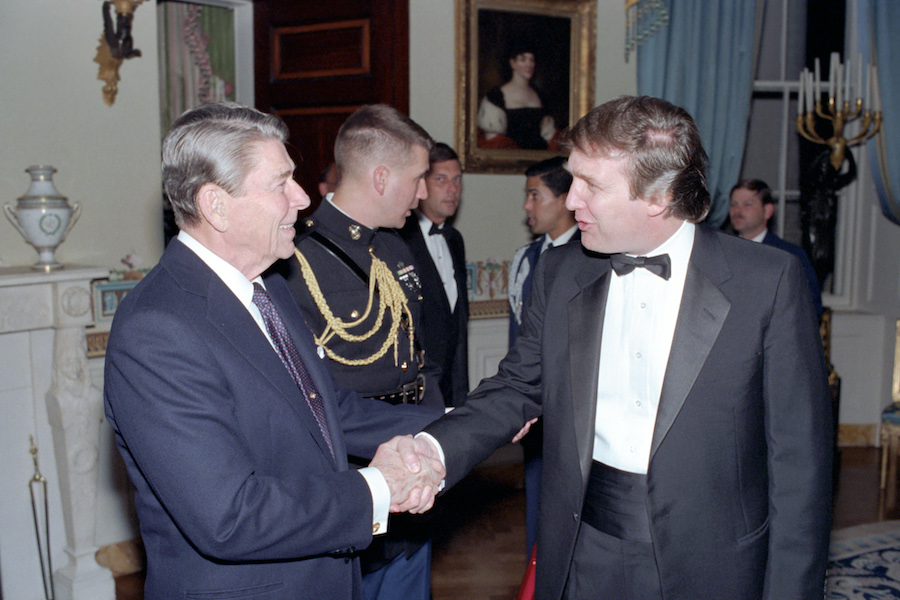 President Ronald Reagan shakes hands with Donald Trump at a reception for members of the "Friends of Art and Preservation in Embassies" Foundation in The Blue Room in 1987.

In 2016, America elected the host of a top-rated reality television show to the White House, but Donald J. Trump wasn’t the first entertainment celebrity to become president.

Ronald Reagan had a decades-long acting career before he turned to politics. Millions of Americans knew him as “The Gipper” or as the host of the 1950’s anthology series General Electric Theater.

There is a growing literature around how the media and celebrities influence politics, including research on the effects of entertainment television on voter behavior in Italy and the impact of celebrity endorsements on political outcomes.

In a paper in the American Economic Journal: Applied Economics, Heyu Xiong considers whether Reagan’s television celebrity helped his pursuit of the California governorship and the White House. The research offers insights into how apolitical entertainment media shapes perceptions of public figures.

“Celebrity participation in electoral politics raises important questions for economic models of voting,” Xiong said in an email interview with the AEA. “The specific question this paper tries to answer is whether celebrity exposure influences voting decisions and increases the political viability of candidates.”

Xiong mined broadcast and election data to figure out whether Reagan’s tenure as the host of General Electric Theater from 1954 to 1962 translated into electoral support during his political campaigns for California's governorship and his 1980 run for the White House. The CBS show was broadcast every Sunday, with each half-hour episode featuring an adaptation of a novel, short story, play, or other work of fiction. Reagan appeared in the first few minutes of each episode to introduce the show and sometimes performed an acting role as well. Importantly, the program did not feature any political content.

Reagan ran for and won the California governor’s race just four years after G.E. Theater had its final broadcast. Xiong used variation in CBS signal strength to determine whether there was any greater political support for Reagan in areas where viewers would have been exposed to the show and found that the impact was substantial.

Building Personal Brand
The chart below shows the effect that Ronald Reagan's television career as host of General Electric Theater had on how voters perceived him. In counties that had stronger CBS reception, people above the age of 30 were significantly more likely to justify their support for Reagan on account of his personal traits. The relationship decreases for later cohorts and reaches zero for individuals not yet born at the introduction of the program. 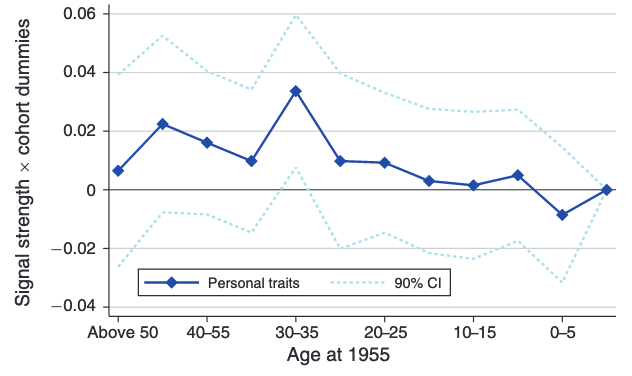 In the 1976 Republican primary for president, a one standard deviation shift in exposure to G.E. Theater increased the vote share for Reagan by 2.18 percentage points.

In the 1980 presidential election, a one standard deviation shift in signal strength led to a 1.37 percentage point increase in Reagan’s vote share. The implied “persuasion” rate — the fraction of the G.E. Theater audience who voted for Reagan in response to watching the program—was nearly 12 percent, which is comparable to that of standard political advertisements.

The research indicates that the show helped Reagan’s political career because it made him more personally appealing to voters.

“My results suggest that candidates' personal characteristics unrelated to policy objectives constitute a significant criterion for vote choice,” Xiong said. “Exposure to candidates through a non-political context may shift voting decisions towards consideration of a personal nature rather than a political one. . . . As a result, individuals can possibly compete in elections by building a strong personal brand through entertainment media rather than on the basis of substantive policy platforms. This could have potential implications for the entry and selection of political candidates.”

“The Political Premium of Television Celebrity” appears in the October 2021 issue of the American Economic Journal: Applied Economics.

The partisan news effect on politics

How much does the political slant of cable news channels impact elections?

Entertainment and the rise of populism