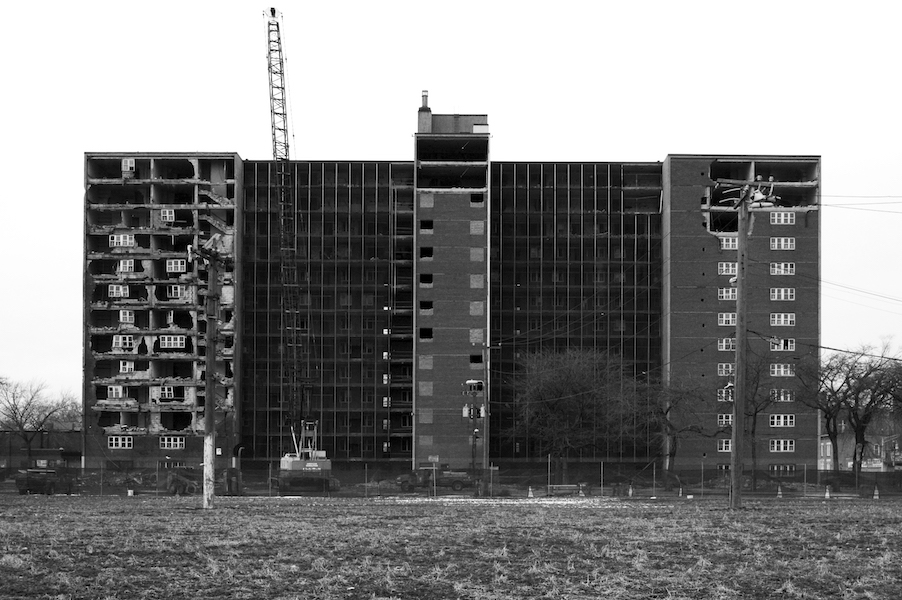 The Rockwell Gardens public housing project on Chicago's west side, which was slated for demolition in 2006.

For many, these demolition projects are a long overdue effort to get rid of high-poverty dens of violence and help the most needy residents relocate to better opportunities. Whether these efforts result in the outcomes city leaders intend is far from certain.

“We don’t really know what’s happened to the people that have been affected by (public housing demolition) at all,” said Eric Chyn, assistant professor at the University of Virginia, in an interview with the AEA. “One of the hopes was that children and adults would benefit by getting out of those areas because these areas were very very difficult environments.”

Chyn’s paper in the October issue of the American Economic Review examines what happened when Chicago razed some of its roughest projects and forcibly relocated families.

We don’t really know what’s happened to the people that have been affected by (public housing demolition) at all.

Chyn found that children who left public housing for more stable communities were 9 percent more likely to be employed as adults and earned 16 percent more per year. The impacts were even larger for kids who were young when they moved. The findings underscore the long-term consequences that living in impoverished communities has for children and offers important insights for housing policy.

Recent research has highlighted the important role of neighborhoods in the lives of children. Raj Chetty and others have shown that kids who grow up in better areas have a higher likelihood of moving up in the income distribution relative to their parents. However, it’s difficult to say whether neighborhoods drive this effect. Parents who choose to live in a better area may simply be more invested in their children’s future, and therefore their children are more likely to succeed regardless of where they live.

A 2016 study in the American Economic Review by Chetty, Nathaniel Hendren, and Lawrence Katz examined the federal Moving to Opportunity program, which offered low-income families living in public housing the chance to enter a lottery that provided housing vouchers to move elsewhere. The authors found significant long-term benefits for young children. Moving to a lower-poverty neighborhood before age 13 increased college attendance and earnings and reduced single parenthood rates.

The voucher lottery was random, but families still had to apply. Thus, comparing lottery winners and losers could understate impacts of moving out of public housing, Chyn says, because it only compares children whose families were motivated to move. What about kids in families who either didn’t know about the program or weren’t otherwise able to apply?

“Those studies are important and valuable research and can tell you about causal impacts, but in those contexts, you are studying the causal impact for people in your experiment, in your lottery,” Chyn said. “Those samples may be different from the broader population you’re interested in.”

In Chicago, parents didn’t have a choice to move. During the mid-1990s the city embarked on a massive reform to demolish public housing projects. In this instance, parents didn’t have a choice about joining a program to help them move. Residents of the condemned buildings had to move. This was a unique “natural experiment” by which to measure the long-term impact of living in a struggling neighborhood. Chyn could compare displaced children to their peers living in a neighboring public housing building left standing.

As Chyn suspected, displaced families tended to move to more stable neighborhoods, which had 21 percent lower poverty and 42 percent fewer violent crimes, relative to households that were not displaced.

The earnings and employment rates in adulthood for relocated children not only were higher, but those kids were less likely to commit crimes. Displaced children had 14 percent fewer arrests for violent crimes in the years after demolition.

Moving up to opportunity
The chart below shows the impacts of leaving public housing on adult earnings and employment for two groups of children — those who left at ages 7-12 and children who left when they were 13-18 — compared to peers who stayed behind. Click on the buttons to view the different results for employment and earnings.
Source: author data

The effects were strongest for young children. Kids who moved before their 13th birthday earned an estimated $3,036 more at age 26 relative  to non-displaced children. In contrast, children who moved between the ages of 13-18 earned only a few hundred dollars more at age 26 – an effect that was not statistically significant.

The evidence doesn’t suggest that the impacts were driven by better job prospects for parents. Rather, they seem to be due to the influence of safer and more stable communities.

It’s difficult to know what exactly it was about these communities that mattered most, Chyn said. But the research does provide lessons for policymakers weighing the relative merits of housing vouchers versus project-based public housing.

“I don’t think this result speaks to all project based public housing,” Chyn said, “but to the extent that some public housing located in high-crime, low-income environments, vouchers may be a better way to assist households.

“Moved to Opportunity: The Long-Run Effects of Public Housing Demolition on Children” appears in the October issue of the American Economic Review.

What was the long-term impact of Hurricane Katrina on its victims' earnings?

Moving up in the world

New research explains the link between redistributive preferences and perceptions of social mobility.